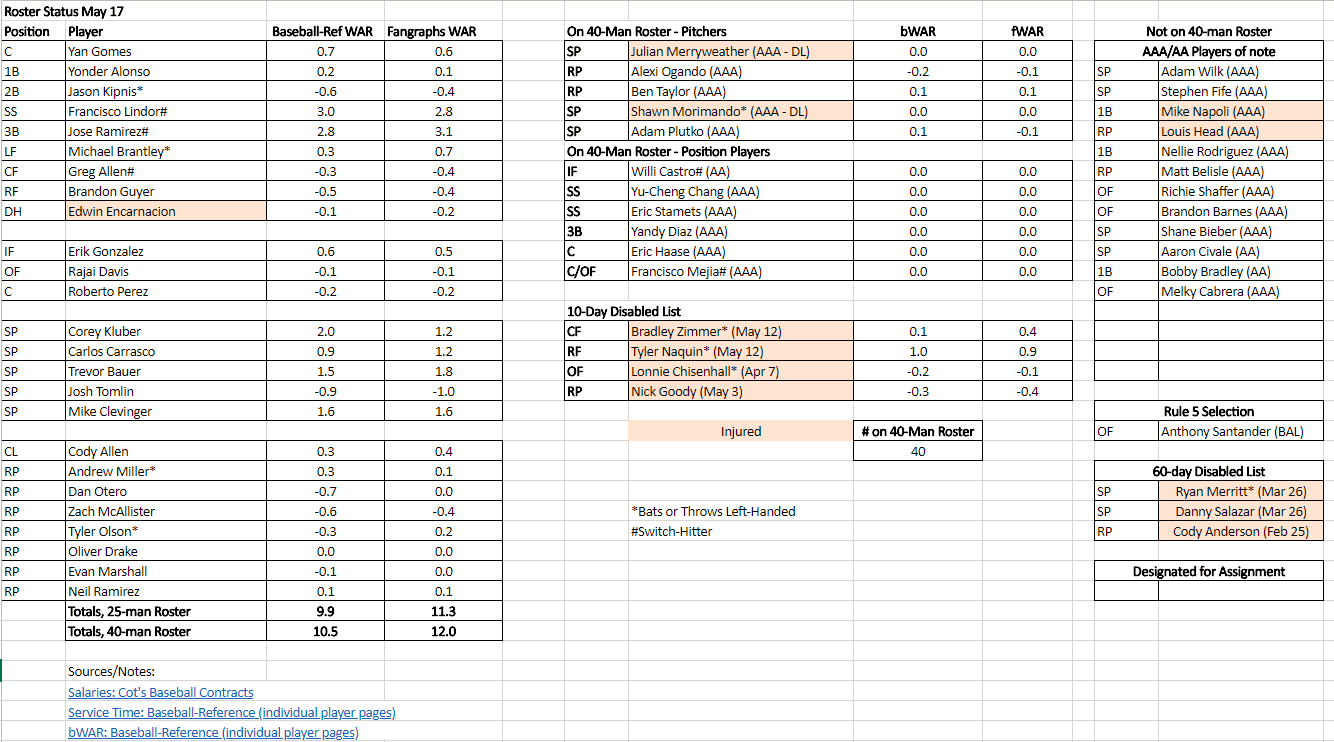 Note: since I put the above roster together, the Indians have added Melky Cabrera to the 25/40-man roster, optioned Evan Marshall, and designated Alexi Ogando for assignment.

Right now the Indians are a roster of stars and scrubs, and the scrubs are winning.

The Tribe has two loci of instability on their roster, with one (the bullpen) being the most destabilizing by far. The outfield, which is other one, has its issues, but the Tribe offense has so far compensated for the holes in the lineup. And with several injured outfielders 1-2 weeks away from returning, those holes may be self-filling. But the bullpen looks to need radical external help; I don’t see any solutions coming from within.

The following is a list of transactions the Indians have made over the past 25 days just involving the bullpen. Keep in mind that the Indians didn’t make a bullpen-related move until April 26th, the day that Andrew Miller was placed on the Disabled List. That doesn’t mean the bullpen was pitching well, it just means that removing the stabilizing force of Miller led to a complete collapse of the bullpen into dysfunction, something that the Indians are still trying to get out of.

Acquired RHP Oliver Drake from the Milwaukee Brewers for cash

Since April 26th, the Indians have added 6 different relievers to the bullpen in an attempt to fill three open spots. Cody Allen, Zach McAllister, Dan Otero, and Tyler Olson have been mainstays on the roster (with the exception of Olson being away from the club for one day for the birth of his child). This amount of churn wouldn’t be an issue if those three spots were being used to funnel a procession of mop-up men onto the roster in order to save the rest of the staff. But that’s not what’s happening. Most of the pitchers added to the rosters were immediately thrust into high-leverage situations, meaning that the Indians weren’t looking for innings eaters but key relievers. For example, Neil Ramirez, who was added last Tuesday, has appeared in 3 games, all of which involved situations which called for a late-inning reliever.

Terry Francona has lost any kind of confidence in McAllister, Otero, or Olson to the point where he’s calling on pitchers he might have never seen pitch before to get outs with the game on the line. Andrew Miller, instead of pitching an inning or two in AAA on a rehab assignment, made his first pitches in a game in 15 days in a high-leverage situation. Now the Indians are going to move Josh Tomlin to the bullpen with Plutko moving into the rotation.

The scary thing about this whole situation is that it occurred in the midst of a fine run of starting pitching. The non-Tomlin starters have almost as a rule pitched at least into the sixth inning, and often into at least the seventh. Given that the Indians have long run out of accessible minor-league options, they are going to try to just minimize the bullpen exposure (with Plutko replacing Tomlin) until they can acquire some help. Most clubs don’t feel the need to trade off pieces until at least the end of June, and even then there aren’t going to be many clubs who feel they are completely out of the playoff race that early. So I think the Indians will continue to try anybody who has been remotely effective in AAA for the next month, and if McAllister/Olson/Otero/Goody still aren’t cutting it, they’ll be cut loose when the Indians made a trade for reliever.

I have never been an advocate of declaring a “go for broke” season, especially when it comes to ephemeral relievers, but the Indians would be justified in trading some prospects (but not emptying out the system) to re-assemble a competent bullpen. Because at the rate the Indians are blowing close and late games, they won’t even make the playoffs. And yes, that means finishing second in by far the worst division in baseball.

I am less concerned about the outfield, even though things look bleak in the short term. The Indians added Melky Cabrera to the roster before Sunday night’s game, though that was something they needed to do before June 1st; the injury situation gave them an opportunity to give Melky an opportunity. If over the next couple weeks Melky can’t hit enough to compensate for his legion defensive inadequacies, then the Indians can cut bait without too much regret once a couple of the injured outfielders return from the DL.

The big loser in this whole situation is Tyler Naquin, who was playing well as Lonnie Chisenhall’s replacement. By the time he’s ready to return to action, Chisenhall will have been back, so even if Melky doesn’t work out, Naquin won’t have a spot to come back to. Perhaps the Indians think about playing him in center, but I don’t see that happening, especially when he didn’t play there even when Zimmer was down. And I don’t see the Indians utilizing him as a reserve outfielder, not when the normal three starters all bat left-handed.