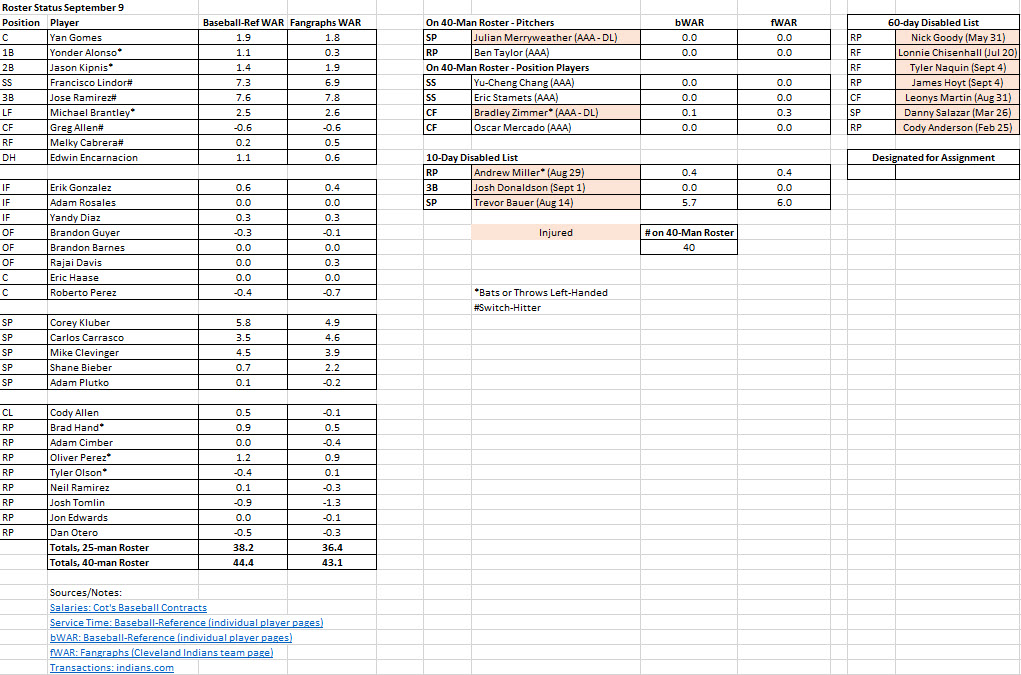 As what’s left of Gordon has made a hash of this weekend’s outdoor plans, what better way to spend this unexpected fallow time than opining over the state of the Cleveland Indians as they prepare for the playoffs? It’s been a while since I wrote anything specific on the Indians in this place (or anything at all for that matter), and there’s lots of interesting sub-plots to cover.

The drama had long been taken out of this season, what with the Twins regressing, and so all that is left to worry about is how the team will be structured for the ALDS. It’s been a weird season, in that the Indians have basically won the division in June despite having at one point only the sixth-best record in the American League. It’s also weird that the team played their best baseball after the division championship became a given. The closest season analogue is probably 1999, a team that ran away with the division (led by 10 games on June 15th). That club would score 1,099 runs, but lost in the ALDS to Boston largely because they didn’t have enough starting pitching for even a 5-game series (although if not for Mike Hargrove making a major strategic error, they might have won it anyway).

And so for the final three months of the season, both Terry Francona and the Tribe front office has had the luxury of not having to worry about the short-term, giving key players time off when they need it, sending players to the Disabled List for any type of physical ailment, and remaining patient with a slumping veteran. Most deadline trades are made with the idea of getting into the playoffs in the first place, but the Indians made their deals with the ALDS (and beyond) in mind. To that end, each of their July acquisitions (Brad Hand, Adam Cimber, Leonys Martin, and Oscar Mercado) are under team control through at least 2019. So while winning a championship in 2018 is still the top priority, a lot of the moves were made with this offseason in mind.

The Indians are going to be the first team in baseball to clinch their division despite having the shakiest bullpen of any contender (though the Colorado Rockies might quibble with that). Like the Rockies, the Indians have succeeded in the standings because they’ve minimized the innings that their weak bullpen has had to pitch thanks to having one of the best starting staffs in baseball. The Tribe bullpen has thrown 387.2 innings, 35 fewer than their closest competitor (Houston, with 422.1 innings). Playoff games tend to see shorter hooks than a regular season game, and the Houston Astros (at this point it would be a shock if any other team is the ALDS opponent) are going to make it a point of emphasis to drive up the pitch count of the starting pitcher so that they can get to that shaky bullpen.

In the best of worlds, a bullpen with Brad Hand, Cody Allen, and Andrew Miller at the top of their games, along with support from Oliver Perez and Adam Cimber could get the job, assuming the starter can go six innings or more. But right now we’re not in that world, what with both Allen and Cimber struggling and Andrew Miller still trying to get healthy. There have been no signs that Dan Otero or Neil Ramirez will be of any help in October, and to that end Terry Francona has been trying out guys like Jon Edwards to see if he can find that final reliever for the playoff roster. But at this point I’d bank on the five mentioned in the first sentence of this paragraph plus at least one starting pitcher in the bullpen for the ALDS. In 2016 Francona leaned on his bullpen for lack of starting pitching; this playoff run, if there is to be a deep one, may depend on leaning on the rotation for most of the playoff innings.

On August 31, the Indians shocked practically everyone by acquiring Josh Donaldson from the Toronto Blue Jays. It’s not shocking that the Jays would try to trade the pending free agent (who supposedly wasn’t getting along with management), but that the Indians would be the team to trade for him. After all, the Indians had Jose Ramirez ensconced at third base, who was in the midst of having one of the best seasons by a third baseman in franchise history. The trade set in motion a series of positional changes, with Ramirez to move to second base, and Jason Kipnis to share time with Greg Allen in center field. In short, Josh Donaldson is going to make Kipnis a part-time player, which brings with clubhouse ramifications. After all, Kipnis has been a core player since the beginning of the playoff run in 2013, and is under contract ($13.67M) through next year. Assuming Donaldson leaves after the season, Jason Kipnis would be the front runner to return to second base, so Terry Francona is going to earn his salary in handling both Kipnis’ playing time as well as mental state through the rest of the season. Kipnis for his part has hit better in the second half, and especially of late (.947 OPS over the last two weeks), and if that continues through the end of the season, Francona would have more than enough justification to make him the starter in center field for the playoffs (with Allen, Guyer, or even Rajai Davis playing against a left-hander). All this juggling is necessary because of Leonys Martin’s life-threatening bacterial infection; thankfully Martin has recovered from it, but won’t be able to play again this season.

This all assumes that Josh Donaldson is both healthy and hitting by the time the playoffs roll around. After acquiring him, the Indians decided to place him back on the Disabled List (he was on Toronto’s DL when the trade happened) in order to get him more rehab at-bats. As a side benefit, the DL stint also helps him avoid this weekend’s series in Toronto.  And so Donaldson has played three games with the Akron RubberDucks in their Eastern League playoff series, and should be ready to go on Tuesday. He’ll then have about three weeks of major-league games to get in hitting shape for the playoffs. When healthy, Donaldson has been one of the best hitters in baseball, and would lengthen a lineup that for a good portion of this season has been very top-heavy.

Melky Cabrera, who I derided both here and in the Let’s Go Tribe comments, has been one of the most productive players on the club in the second half, hitting .312/.379/.500. He’s been especially good against left-handed pitching, which has led Terry Francona to try playing Brandon Guyer in center field when they face a southpaw. Cabrera is still an awful defender, but his re-emergence has plugged a massive hole in right field left by injuries to both Lonnie Chisenhall and Tyler Naquin. Martin was horrendous in his first stint with the Indians, but because he cleared waivers after the Indians designated him for assignment in June, was able to return for a second time, and this time has stuck. If you would have told me in May that Melky Cabrera would be the starting right fielder in the ALDS, I would have despaired for their lineup, but I am so glad to have been proven wrong.

Yandy Diaz has started to hit at the major-league level, which has been welcome to see. He has a rather unconventional hitting profile, whacking singles and the occasional double, but rarely hitting the ball out of the park. He’s not a slap hitter at all (his average exit velocity of balls put in play is 92.5 mph, one of the best in baseball), but he doesn’t elevate the ball much at all. Since he got a week’s worth of regular playing time in August thanks to Edwin Encarnacion’s sore arm, he’s hit whenever he’s in the lineup. But he doesn’t really have a home position, which makes it difficult to find playing time for him on a club with an everyday DH. And that raises the question as to whether there will be a spot for him on the ALDS roster. For him to have a spot, he needs a role, and the only role that makes sense right now is of a pinch-hitter for Yonder Alonso, though he’ll also need to prove his defensive chops at first base. To this point he hasn’t started a game as a first baseman, but I’m hoping Terry Francona will get him some chances there as the season winds down. With Alonso struggling in the second half (.671 OPS), perhaps by the time the playoffs begin Diaz will even nab a start from Alonso (against Dallas Keuchel).