As someone who yearns one year to see a crazy series of tiebreakers at the end of the regular season, the National League presents a very intriguing scenario, in contrast to the American League (which might have all the seeding complete before the weekend). 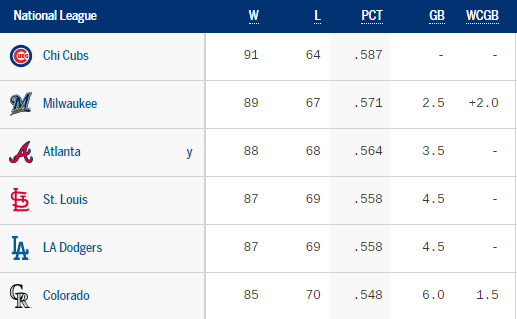 There is a possibility of having 6 teams in the NL finish with the same record, and 5 of those teams having to play at least one tiebreaker (Atlanta has already clinched their division, and they wouldn’t have to participate, as determining seeding in the NLDS doesn’t require a tiebreaker game).

The most likely ending record for a 5-way tie is 92-70. Here’s what the other 5 contenders would have to do this week in order to set up that tie:

Colorado has the longest odds, as not only do they have the worst record of the contenders, but have to rely on outside help to get them into a tiebreaker, while St. Louis largely controls their own destiny, as they play both Milwaukee and the Cubs this week.

If all 5 teams tie, here would be the winner-take-all games next week in the National League:

There are many other less crazy scenarios even if this one doesn’t line up, but for now I’m rooting for the five-way tie. I’ll update these scenarios as the season draws to a close.