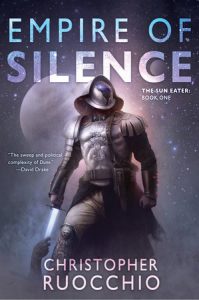 Back in my high school days, which was more decades ago than I’d care to admit, I was a regular at  the tiny Waldenbooks at my hometown mall. I worked a couple doors down at a soon-to-be defunct department store, and so spent a portion of my new-found riches on books, particularly in the science fiction section (which consisted of one shelf). It was there I discovered Dune, Hyperion, Robinson’s Mars Trilogy, Asimov’s space and robot stories, among others. But that was the last time I spent a considerable amount of my reading attention on that genre, so take what follows with that in mind.

Spoiler-Free Review (may add a spoilertastic addendum in the future)

Empire of Silence (the first in a multi-volume series) takes place in a far future in which humanity has expanded into a considerable portion of the Milky Way. There are several polities in inhabited space, the largest of which is the Sollan Empire. This Empire and its war with an alien species is the backdrop for the events of the book.

The narrator begins his tale with a rather unendearing statement: it was he that destroyed a star, and with it billions of lives. In his advanced age, he is known as both a hero and a villain, and as he assumes the reader knows the basic history of the major events he was involved in, he is content to tell us the story of his life instead, beginning with his formative years. So while this book fits very comfortably into the space opera subgenre, it does not flit between characters and places willy-nilly. The only places you visit in Empire of Silence are the places that the narrator visits, which may seem like it narrows the scope too much, but I appreciated that by the end of the volume.

The narrator, Hadrian Marlowe, is born a noble (or palatine, to use the book’s parlance), a potential heir to a prefecture within a planetary duchy (there are a quarter-billion inhabited planets in the Empire). But while on the surface this minor fiefdom wouldn’t seem to be that important in terms of the Empire itself, this prefecture controls a rich source of uranium, the fuel that drives interplanetary vessels, and as the Empire is in the midst of a bloody war with the Cielcin, the only other advanced species in the galaxy, the control over the prefecture and therefore the uranium is an important goal for the various palatine houses of the Empire.

Empire of Silence delves into this complex political environment in its first section (almost a prologue), and during it you’ll be tempted to thumb your way to the appendices often, trying to wrap your mind around the all the players, the positions, and the relationships among the palatine of House Marlowe. There is a lot of world building throughout the book, especially in the first section, but it never ceased to be boring, as it was embedded in the story and characters, almost never force-fed to the reader via long info-dumps of dialogue within the story. For those who want to fully and quickly grasp the world the book takes place in, the appendices will serve that purpose, but you can also get that sense of the world gradually by ignoring the appendices and just reading the book itself. After finishing the book I read through the appendices in detail, and found that very little of what I gleaned through context differed from canon.

But at its heart Empire of Silence is a character-driven story, dealing with Hadrian’s conflicts with the world around him and, more importantly, within himself. Although this tale is set in the far future, with all the biological and technological changes that come with it, the dilemmas Hadrian faces are very familiar ones. The yearning for freedom in a strict hierarchical society, the question of whether duty should override ones personal moral code, and if one’s honor should override the optimal political strategy are questions that people have asked throughout history. Even the world itself, while on the surface completely alien, contains many echoes from past and present civilizations, be they names, concepts, or even government types.

This being book one in a series, many plot-related things are not explained. That goes with the territory, though I would have liked to have had one “section transition” (euphemism to avoid spoilers) be a bit less jarring. Thankfully, the second book in the series, along with a stand-alone novella, will be released soon, so perhaps some details will be forthcoming there. As for the other unknowns, be they related to the mystery hinted at towards the end of the book, or the other details of the world of the series, I’m more than happy to let those be slowly revealed as the series progresses.

If you couldn’t tell by now, I enjoyed this book. There were some spots that dragged a bit, and as mentioned above, some of the transitions were more abrupt than they needed to be. But I adored the world-building, and can’t wait to dive into future stories.