The Internet to me is an almost magical place because I lived a significant portion of my life without it. I learned to write letters (as in pieces of paper that you sent to other people via the Postal Service) in school because that was a key form of communication, went to the public library to research for school projects, and watched (grainy) television or rented videos at physical stores for entertainment. Nowadays you may think about these things as hardships, but 20-25 years ago they were the best technology we had at the time and were not thought of negatively. In fact, things like going to the rental store for a weekend movie was quite a novelty, at least where I lived.

By the time I reached high school, I had access to dial-up internet, and there were a couple of a computers at school connected to the Internet, but it wasn’t really until I got to college that I experienced anything like the Internet we have today. The ability to have your own constantly-connected high-speed portal to the Web was an exhilarating experience, my generation’s version of experiencing the widespread availability of electricity.

The delivery mechanism was the revolution that came with the Internet. We still communicate, we still research, and we still consume entertainment, it’s just that now we do these things from our computers instead of through physical means. Time and distance no longer matters; all you need is an Internet-connected device. That device allows anyone in the world to access the same information that a couple of decades ago was only available to people in universities or in large, wealthy cities. This democratization of access is one of the major breakthroughs of the last century, and we see the effects of that unfolding before our eyes every day. No longer does the average man or woman just consume information, but contributes it as well.

Surfing the web was the main pastime for me in the early days on the Internet. The joy was in the search, and occasionally you’d find a gem. The Internet, even in those days, was a massive, massive place, and although you rarely found exactly what you were looking for, you’d often find something that you weren’t looking for but was interesting nonetheless. Many of the sites that I follow to this day I found unintentionally, usually while I was searching for something completely different. Some I found because someone I regularly read recommended them.

When I first started this site, a huge chunk of my time and energy was spent figuring out how to be seen by other Indians fans. There were portal sites that you could submit your blog to, and ways to get noticed by the search engine spiders, but the more effective way was simply trading links with other sites; someone e-mailed you about their blog, you checked it out, then you posted a link on your site to his blog and he posted a link to you on his blog. In that way you created a connected community of readers, in this case Indians fans.

Nowadays, the best way to get noticed quickly is to just stake out a spot in the walled gardens of the large social networks and try to play by their rules, because that’s where the readers are. If you’re a consumer of content, you’re going to go to one of the big sites, because that’s where the content is; you just have to allow these sites to know your search history and some personal information in exchange. This begins a positive feedback loop resulting in much of the content being concentrated in fewer and fewer places. For example, Vidme, one of the few competitors to YouTube, shut down last year, noting the extreme difficulty in monetizing user-generated video content. This comes in the form of the hardware needed to stream millions of videos concurrently, the algorithms needed to curate these videos, and catering to the needs of fickle advertisers. For a place like Facebook, you add the difficulty of poaching users: you can’t just convince individuals to jump to your platform, but entire circles of people, because people aren’t going to go somewhere new if their friends aren’t there.

A Sidebar: The Ad-Based Revenue Model

The modern digital currency is not the dollar, yuan, euro, or bitcoin, but personal information. This currency is the backbone of the ad-based Internet, and the reason why Google and Facebook are two of the largest companies in the world today.
When you visit any kind of website that is both free to the reader and has advertisements, you are the product. The content provider makes its money via advertisements, and they get more money with more impressions. The more people visit the site, the more impressions the advertisers get, and the more money the content creator gets. This model itself is not new, as newspapers, television, and radio all have operated under this for decades. The difference with this new medium is that advertisers have immediate feedback on how much traffic they received as a result of that ad. Instead of getting partial feedback (for instance, the prevalence of discount codes tied to specific advertising campaigns is an attempt for companies to judge its effectiveness), companies know exactly how many people clicked on that banner ad, plus perhaps other information on those people.

Digital content companies like Google and Facebook have taken this a step further. Because of the data they have on their users, they have the ability to place ads in front of the people who are the most likely to be interested in them. They have massive user bases, and more importantly information from those users to be able to tailor advertisements to them. This is accomplished through a computer algorithm, which is a fascinating topic in and of itself. In brief, these algorithms sift through the massive amount of content on a site like YouTube and determines what you see on the site based on the criteria they are given. For example, the YouTube algorithms could be operating with a goal of maximizing the average time spent on the site, and the algorithm takes it from there, even if it affects the makeup of the audience and the type of content that is preferred. Google’s AdWords is the dominant advertiser on the Internet, with ad revenue accounting for $95.38B for the company in 2017.

Another important distinction between the “old” and “new” method of advertising is that the actual content on the “new” sites is not being created by the company, but by its users. Google/YouTube, for example, provides the infrastructure to handle streaming videos, as well as the algorithms that attempts to give people videos they want to see, but they (for the most part) don’t make the videos themselves. If the local newspaper followed the Google/Facebook model, they would own the printing equipment and the distribution network, but not write any of their stories.

I was one of the first people to adopt many Google products, including Blogspot (which Google had just purchased in 2003) and Gmail (which is the reason I have a rather unique e-mail address), but I have begun to recognize the downsides of the algorithmic ad-based model. Many YouTube content creators, stung by demonetization, have gone to Patreon or similar sites so that they can get  a consistent income without going behind a paywall. Some new sites, like The Athletic, have committed to a pure subscription model. There are also browser-based models being tried out, which shifts the walls from the site to the browser. I hope one of these competing models succeeds.

The algorithm is just a tool, neither inherently good nor bad.  But even if it works well, it still removes much of the agency of the user, and in order to fully utilize the algorithm, you need to provide these sites personal information you wouldn’t want anyone outside your family or close friends to have, never mind available to the Internet. There has always been a trade off in this arrangement, but over the past several years that trade off has become much less tenable to me. I’ll use these major sites as ways to find content, but once found, I’ll read/watch them via an RSS reader, which I think is a way to consolidate what you want to consume, rather than relying on a site telling you what it thinks you want to consume.

So if I’m not on  Facebook as much as I used to, or suddenly move this blog to a different platform, you’ll understand why.

While writing that last sentence, this popped up in my Facebook feed. Maybe the algorithm knew I was writing this post….. 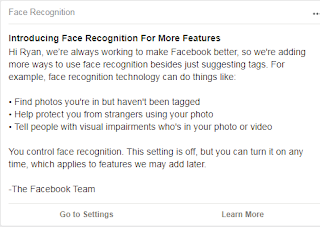 An introduction to how algorithms function:

Why the YouTube Algorithm will always be a mystery:

Why the types of videos YouTube prefers have changed (algorithm reference)

Explanation of how AdWords works