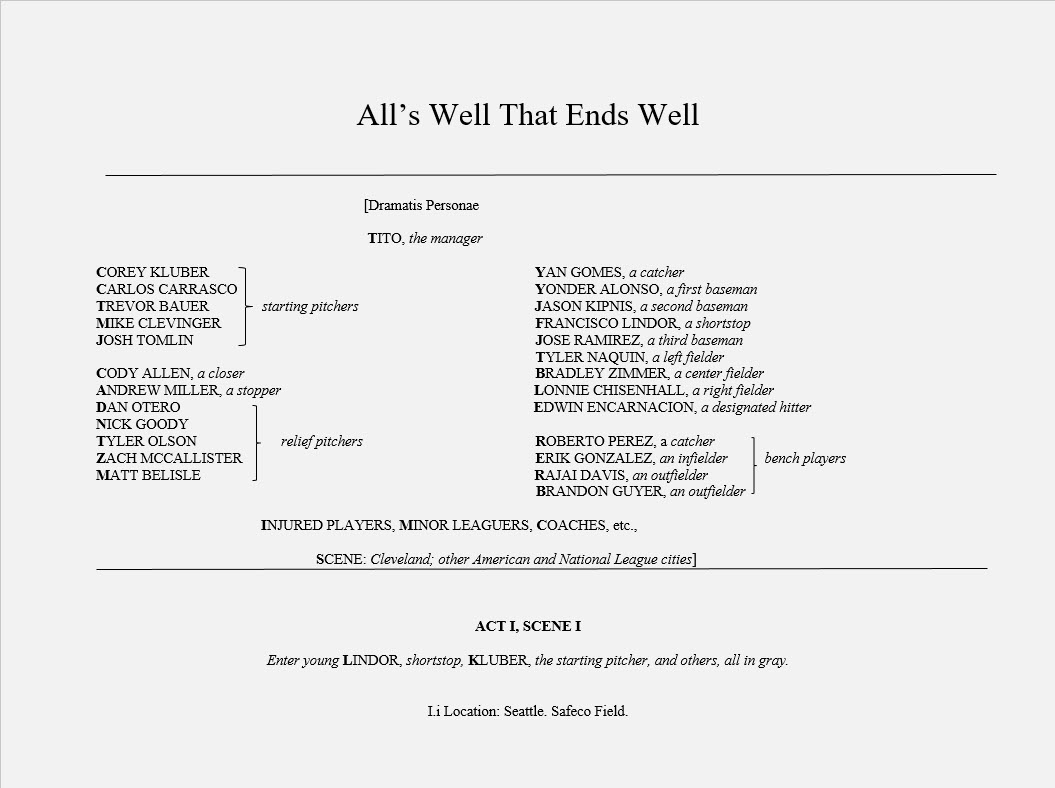 An audience watching a play may know the characters who will be in the performance, but not what they will do, whether they live or die, succeed or fail. However, the author of the play and the performers on stages knows exactly what will happen from the time the curtain rises to the final exit. The entire thing, from the script to the set to the costumes, is meticulously rehearsed, and a successful performance is one that has almost no deviation from the plan. If you watch two performances, spaced two weeks apart, almost nothing will have changed, which is by design.

Baseball is not a play. Its players may rehearse repeatedly, just like their thespian counterparts, but neither they nor those who manage them know what the outcome will be even if all goes perfectly. And it almost never goes perfectly. The main difference separating baseball from the stage, of course, is that baseball is a sport, or more appropriately for this subject, a public competition. The object is not the perfect spectacle, though sometimes that can happen if the stars align, but to win the game.

At the beginning of a baseball season, neither the fans nor the performers nor the management of the club knows what will happen or even who will be standing on the field in the final scene, the final game of the season. Sometimes even individual games are like this, with players leaving the field unexpectedly, giving way to hitherto unknown understudies. The 25 players who step onto the field before Thursday night’s opener will almost certainly not be the same players who (hopefully) step onto the field before the Indians’ first playoff game in October. Some changes will be those everyone was sure would happen, but there will be at least a few that no one saw coming. It is this sense of mystery, of persistent unknowns despite all attempts to systematize it, that keeps me enthralled with baseball.

Here is what the roster looks like 4 days before the season begins. I’d first like to point out that some moves haven’t officially been made, hence the reason for there being 42 players listed on the 40-man roster. The Indians will be adding Rajai Davis and Matt Belisle to the roster before the season begins, but we don’t know who will be departing the 40-man roster to make room for them. One of those players could be Rob Refsnyder, though he could make the Opening Day roster himself if Brandon Guyer isn’t ready to go. Both Giovanny Urshela and Ryan Merritt will be placed on the Disabled List in the next couple days, so the Indians can keep both of them for the time being. The Indians could place Julian Merryweather on the 60-day Disabled List to free up a spot, though that’s not a move without drawbacks;  Merryweather would be earning service time for the entire season if the Indians place him on a major-league DL.

I think one player who will be DFAed is Abraham Almonte, who received public criticism from Terry Francona earlier in the spring and was optioned very early in the spring, especially for a veteran who has over 300 MLB games under his (tight) belt. With two injured outfielders (Brantley and Guyer) and an open reserve spot available heading into camp, that early demotion stood out to me.

If I had to rank the likelihood of roster moves to clear spots this week, it would be this (the Indians will need to make two moves):

All four players headed to the 10-day Disabled List shouldn’t stay there that long (I say, knowing full well the storied history of Tribe setbacks). Brantley was on the cusp of playing on Opening Day, but the Indians are trying to be absolutely sure that he’s ready. Danny Salazar threw off a mound a couple days ago, which is usually the last thing that happens before rehab starts begin. Merritt and Urshela don’t seem to have serious injuries, but their status (both out of options, with no obvious spot on the 25-man roster) will ensure that their rehab stints are as thorough as possible.

The Salazar return would create the biggest roster conundrum, as the Indians are still adamant that Danny is first and foremost a starter, not a reliever. That means either Josh Tomlin for Mike Clevinger would be shunted to the bullpen, while a reliever would be shunted off the 25-man roster or the Tribe goes with a three-man bench. File this concern under “good ones to have,” as usually these pitching surfeits only exist in the most optimistic of baseball fanatics’ minds.

Even with these initial injuries and roster concerns, the Indians still look to have the easiest path in the American League to make the playoffs. The Twins will be a serious threat, and the Royals will be competitive, but the AL Central looks to me the weakest division in the AL, and perhaps overall. But the part where the Indians waltz to a third-straight AL Central title has not been written; we’ll have to find out how this drama ends along with everyone else.