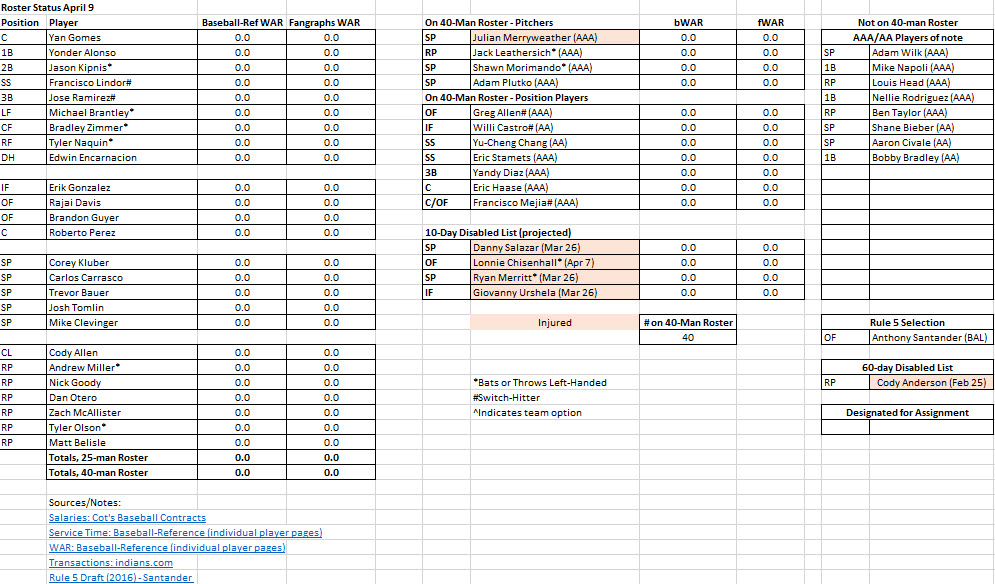 I’ve intentionally left the results of the first 10 days off the chart above. For starters, the baseball-reference WAR isn’t listed for the current season. But even if it had been there, I’d still leave it off because we’ve only had a small sample of games to use for it. Basically, the numbers wouldn’t be very meaningful.

If the numbers were listed there, they’d show a very poor offensive showing but a very promising pitching performance. Only one regular had an OPS (on-base percentage+slugging percentage) over .700 at the time of this writing, with a second (Tyler Naquin) having just been recalled from Columbus. I’m not going to delve that much deeper into this, other than to say that those with decent or fine histories should eventually turn it around, and those with suspect histories need to turn it around (or else they won’t be in Cleveland for much longer).

What I am worried about is the depth in the outfield.  Michael Brantley was back in the lineup for Friday’s home opener, but by the early innings of Saturday’s game Lonnie Chisenhall had re-injured the calf that had caused him to missed most of the second half of last season. The early prognosis is that he’ll miss 4-6 weeks, but that’s just an estimate. Tyler Naquin is going to be the everyday right fielder, and now has the opportunity in 2018 that he didn’t get last year (he was hurt when Lonnie Chisenhall last injured his quad). Behind Naquin the outfield depth isn’t very good, and a lot of Tribe fans would place Naquin himself in that “not very good” category. I don’t think either Brandon Guyer or Rajai Davis can credibly fill an everyday corner role for longer than a week or two, though that might be what the Indians have to do if Brantley has to miss any time.

Greg Allen is only other outfielder on the 40-man roster, and is not going to provide much offense, which is what a corner outfield spot requires. After that, the Indians would either have to move someone from another position (Yandy Diaz, Francisco Mejia, even Jason Kipnis) or players that aren’t on the 40-man roster (Richie Shaffer, for example). So yes, the only thing that’s standing in the way of a full AAAA outfield is Michael Brantley’s health, which hasn’t exactly been sterling the previous two seasons.

Speaking of outfield depth, current/former Tribe outfielder Anthony Santander hit his first major-league home run yesterday. Let me explain the “current/former” descriptor: Santander was selected by the Orioles in the Rule 5 draft after the 2016 season, and because he spent most of 2017 on the Disabled List, is still property of the Indians. But given that the Orioles just need to keep Santander on their 25-man roster another month, there’s almost no chance that he’ll be returned to the Cleveland organization. I’ve typed way too many words on the Santander situation at Let’s Go Tribe, but I think it’s worth reiterating here:

Sidebar: The Gray Area of Rule 5

The Orioles in recent years have utilized the Rule 5 draft more than any other team. They’ve selected at least one player in Rule 5 since 2006 (15 in total), and they usually try to keep them on the roster. They selected TJ McFarland from the Indians in 2012, and the move paid off; he remained on the Baltimore roster the entire 2013 season, and would remain with the Orioles for three seasons afterwards. McFarland is an example of a player who was blocked in his organization, and was able to get to the majors more quickly with another team. Situations like McFarland’s are the reason Rule 5 was implemented.

Still recovering from the shoulder surgery, Santander played a bit with the team in Spring Training before coming down with elbow soreness. That led to him being placed on the major-league DL, and allowed the Orioles to keep him without having to use a 25-man roster spot. He would return to the active roster in the middle of August, meaning that the Orioles only had to keep him on their 25-man roster a grand total of 15 days (on September 1, teams can expand their active roster, meaning there was no real cost to keep Santander on the roster in September).

Normally a team has to keep a Rule 5 selection on their active roster for the entire season (or 180 days), but in cases where the player spent time on the Disabled List in the season after his selection, teams just have to keep him on their active roster for a total of 90 days. To me, that creates a perverse incentive for clubs to select players in Rule 5 that are likely to miss time due to injury (as it’s much easier to comply with Rule 5 with an injured player), and therefore making clubs have to protect talented but injured prospects on their 40-man roster. As a recent example, had the Indians known that Julian Merryweather would need Tommy John surgery in October, they might have gone ahead and protected him anyway, because a club could have selected him in the Rule 5 Draft and stowed him on their DL in 2018 without any penalty, then try him out in 2019 after he recovers.

To get back to Santander and the Indians’ present outfield situation, had Santander remained in the Indians’ organization, he probably would have been added to the 40-man roster this winter, and would have been a legitimate major-league option for the Indians in the outfield, especially considering the injuries (and Abe Almonte’s fall from grace). Santander does have a year of service time thanks to Rule 5, but he didn’t get a real opportunity any faster with the Orioles than he would have had with the Indians. That’s why I think the minimum amount of time spent on an active roster to satisfy Rule 5 requirements should be expanded to 150 days, which would equal the amount of time clubs have a roster limit of 25 players during a single season. That would take away the temptation to draft injured players, and also ensure that Rule 5 players, if injured after their selection, get a legitimate opportunity to play in the majors.

A Postscript from March 26

In my last Indians (current season edition) post, I guessed that the Indians would follow this order in clearing 40-man roster spots for Rajai Davis and Matt Belisle:

The Indians went with (2) on March 27, trading Refsynder to Tampa Bay, then used the open spot to claim left-handed reliever Jack Leathersich off waivers, who is now pitching in Columbus. They then went with (1) and (6) to clear spots for Davis/Belisle on March 29. Almonte would be claimed on waivers by the Kansas City Royals on April 2, while Taylor would clear waivers and remain in the organization (Columbus).

Merryweather remains on the Disabled List, but on a minor-league roster, which means he is not earning MLB service time.

Both Urshela and Merritt remain on the 10-day Disabled List, and the Indians will have to make difficult decisions on both once they are activated, as neither player has an option year remaining.