Several years ago, I received a very generous gift.

My great-aunt, whom I had never met (she had moved out of state long before I was born), had recently passed away, and found in her effects were several pieces of Cleveland Indians memorabilia. Given my reputation as an Indians fan, I was offered these pieces by my aunt in Florida. I accepted, though I had no idea what I’d be getting.

Here’s what I got: 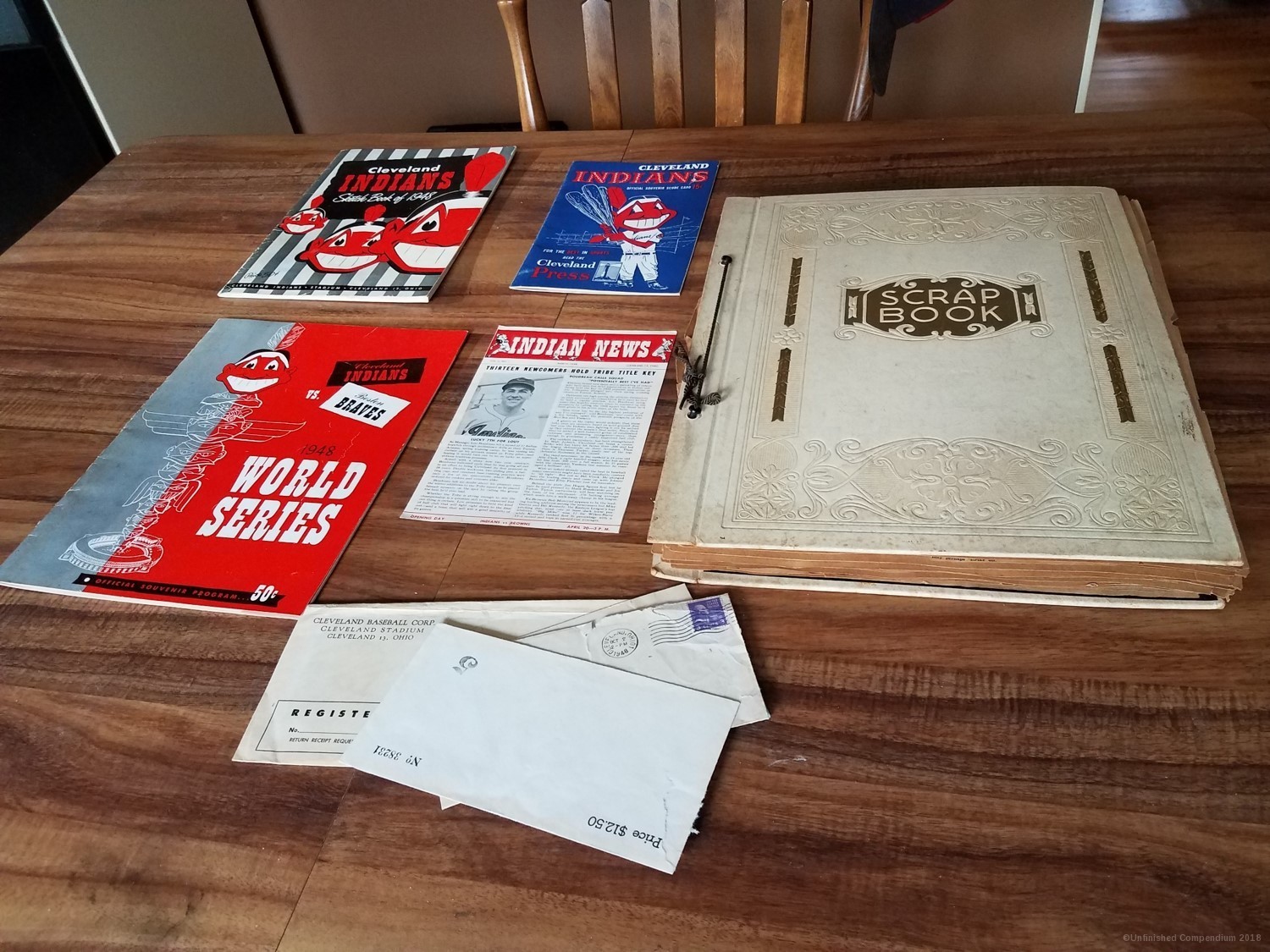 I was surprised, to say the least. There is one item that is from a different season, but all the rest of these items are from the 1948 championship season. The only exception being the score card, which is from the 1954 season (and which is special in its own right).

Let’s start from the top left and work our way around clockwise:

Cleveland Indians Sketch Book of 1948. A promotional book that I believe was sold separately as well as given away for at least one game (the doubleheader against the Yankees on May 23). Includes pictures and profiles of players, coaches, and the front office, as well as some historical features on teams of the past.

Cleveland Indians scorecard, September 1954. To be more specific, this is from the September 25 11-1 victory over the Tigers, which was the 111th and final victory of the season. My great-aunt scored the game, making several notes on player moves and other details.

A scrapbook full of newspaper articles from August-October 1948. The articles and photographs are mostly from the Plain Dealer, though there are a couple of Cleveland Press clippings. I’m not sure I can show these because they are still covered under copyright, but at the very least I’ll describe them in a later post.

Ticket envelopes and forms from 1948. The postmark on the return envelope was marked October 2, 1948, which was four days before the World Series began, so I assume either it contained ticket(s) for Game 5 (which my great-aunt attended) or a refund. One of the photos in the scrapbook showed a long line of fans at Cleveland Stadium attempting to get tickets for the World Series, and my great aunt noted that she was in this line, so maybe she got the ticket that way.

Indian News from March 1948. A four-page pamphlet on the coming season, with details on ticket packages. This is going to be what I’m covering in detail next time; the remainder of the items will be covered of the course of this season, which is appropriately enough the 70th anniversary of the franchise’s last World Series championship.

The plan for this series is to showcase these items in the context of what was happening with the team at the time, and to glean what details I can about how Cleveland fans were feeling about the amazing 1948 run. And, on a selfish note, try to find out a bit more about a relative I never knew but also have something in common with.

So without further ado, a closer look at the Indian News pamphlet.

Not brought up in this preview piece is that the Indians almost traded Lou Boudreau the previous winter. Owner Bill Veeck actually was prepared to introduce Al Lopez as the new manager, but the Boudreau deal fell through at the last moment. The fan outrage was so great at the near-trade that Veeck needed to go on basically a winter apology tour, and ended up giving Boudreau a two-year contract to boot. One thing that Veeck was able to insist upon was a shakeup of the coaching staff and the front office, the biggest addition being former star pitcher Mel Harder as the new pitching coach. For more on Boudreau and Veeck’s relationship, check out the Top 100 profile I did on Boudreau at Let’s Go Tribe.

Allie Clark, who would have a career year in 1948, came over from the Yankees in a trade that saw Red Embree heading to New York. Both Judnich and Muncrief came via a trade with the St. Louis Browns.

To throw out some equivalents on the ticket prices (using this site):

The slugging Giants were led by Johnny Mize’s 51 homers, with plenty of help from Willard Marshall (36), Walker Cooper (35), and Bobby Thompson (29). Given that live national TV coverage was still well in the future, these two exhibition games would have been a huge draw.

Pat Seerey may have showed up in the best shape of his life, but he would be dealt to the White Sox after appearing in just 10 games with the Indians in 1948.

Tucker and Judnich both would play key roles for the Indians, but it would Larry Doby who would get most of the action in center field in 1948. Doby, who was an infielder by trade, made the shift to the outfield and quickly became a star.